After that first week, progress kind of slowed down for a little while. The first week was very encouraging but by week 2, we started to really feel the roller coaster of the NICU. Having one baby or child in the hospital for an extended period of time is hard, but having three, at the same time, it’s hard to explain. In the same day, one baby gets good news and another gets really hard news. I couldn’t just sit in one room watching them sleep because they were all in different rooms. You have to wash up and go through this whole process each time you change rooms so that you don’t pass infections, and I could only see them every 3 hours because of the schedule the NICU had them on. It is extremely draining to say the least. Plus, I was also still in a lot of pain from the c-section. They essentially sliced my entire abdomen open, and then I needed to be able to walk from the car to the NICU, walk from room to room, and stand at the babies’ isolettes for a few hours each day. I quickly realized that in order to heal, I could not be at the hospital all day, even though I wanted to. Derek also realized that his paternity leave would be better spent when they came home so we got into a routine of him going down early in the morning before school and me going down for about 3-5 hours each day. Again remember in that 3 hours, I only got to see each baby one time for about 5-10 minutes each since they need to spend most of the day sleeping and growing. We got so tired of people telling us how nice it must be to be getting so much sleep while they were in the hospital. First of all, what we wanted more than anything was to be up all night with our babies because that would mean they were healthy and at home with us. Secondly, I had to pump every 3 hours even all through the night, so I was still waking up, but instead of getting sweet baby snuggles, I had to sit in an empty nursery listening to a machine each night. It was terrible. Pumping gave me something to do though in the hours I spent away from our babies. I got to feel like I was doing something to help them, since I couldn’t really do much. It’s hard knowing that these nurses and doctors are taking care of your babies instead of you. But again, we had prepared ourselves for this happening the whole pregnancy, its just hard to really know what it looks like until you are there.

So, Derek went back to school, and my mom thankfully stayed in Atlanta to drive me to and from the hospital each day to see the babies and get our report. Lucy quickly became the rock star and was breathing like a champ and got her pic line out in the 2nd week. A pic line is a permanent IV because the babies needed so much extra fluid and the babies try to pull out the temporary ones. The pic line goes in their foot so they can’t reach their little hands down there. Fun fact: preemies often have a foot phobia later in life because they have so many IV’s and needle pricks and tests done on their feet. To prevent this phobia, we had to give them little foot massages each day!

Oliver had a lot of trouble breathing in week 2 and had many scares where he would just stop breathing. Their lungs just weren’t developed, and it took time for them to figure out how to breathe. Their little bodies would just forget that it was supposed to be breathing. It was a regular occurrence to either be holding one of the boys or to watch them in their isolette or to get a phone call at home that one of the babies had stopped breathing (usually one of the boys). Derek and I both had one of them turn blue in our hands and listened to all of the alarms and stats plummet. We quickly had to learn to not panic but to do special holds and pats to try and get them to remember to breathe again. Each time that alarm started beeping telling us that the breathing was too low, my heart would drop. 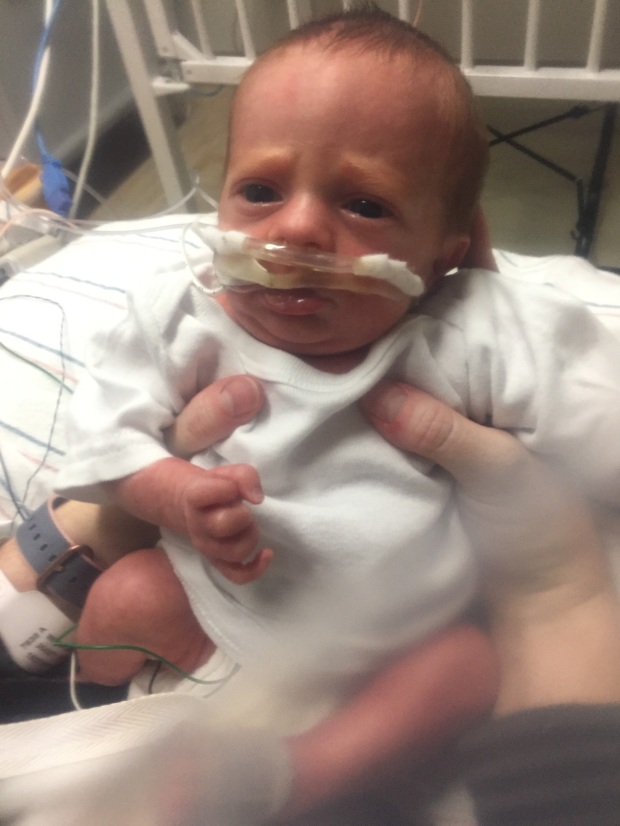 The two things I remember most about the NICU was that I had to ask to hold and or touch my babies each time, and the alarms. The alarms never stop. I would hear them in my sleep. They make my blood pressure rise just thinking about them. I seriously just got anxious typing this. They were constantly going off. Each baby had a wire measuring temperature, a wire measuring blood pressure, a wire measuring breathes per minute, a wire measuring heartrate, and a wire measuring their oxygen level. There was a range that each of these had to stay in and anytime a baby dropped below or went above this range, the monitor would beep. It was a loud constant beep. I learned after a couple weeks that some of the alarms were not a big deal, but others were very serious, so as soon as one goes off, you rush to spot which baby it is and which alarm and if it is a serious one. So for a while, I was constantly panicking.

We got to bring our own clothes and blankets for the babies which made us feel a little more a part of taking care of them. It may sound weird, but they let us do their laundry, and I loved getting to bring it home with me each day. We even let Turbo (our dog) sniff the clothes each time we brought it home so that she could get used to their scent. It made us all feel like a part of them was at home with us.

Now almost a year later, it’s easy to forget the time that we spent in the NICU. It feels like so long ago. One of my themes for the year is going to be remembering and celebrating all that the Lord has carried us through. I’ll write more later about my theme verse, but for now as we are heading into SLO’s birthday week, I am celebrating all that we have overcome this year. We not only survived, but we really have enjoyed and been grateful for each day with these 3. The challenges are changing and are harder in some ways, but I have been reminded this week that God has more than proven that He will be with us in whatever may come next.

2 thoughts on “The NICU life”